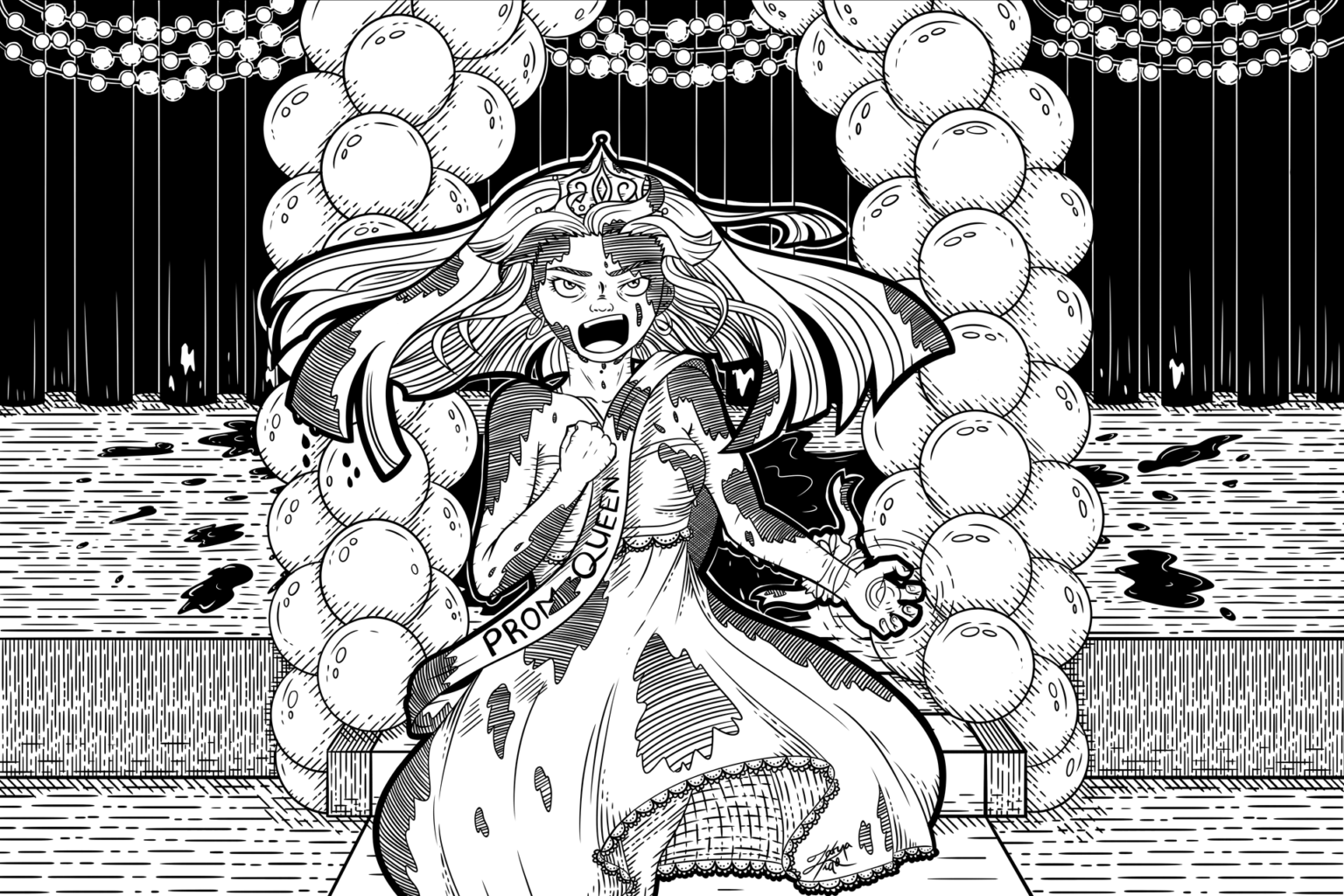 Synopsis:
The story of misunderstood high school girl Carrie White, her extraordinary telekinetic powers, and her violent rampage of revenge, remains one of the most barrier-breaking and shocking novels of all time.
Genre: Horror
Available from: Amazon UK | Amazon US | Audible
Estimated Read: 5 minutes

For those of you who’re unaware, Carrie is the story of a lonely teenage misfit who struggles to fit into her school’s social groups. In the process of being bullied, Carrie discovers her telekinetic powers, capable of causing great destruction.

A large part of the book is made up of newspaper cuttings, articles, letters and excerpts from essays; all are discussing the phenomenon of Carrie White. Set in the fictional town of Chamberlain, Maine Carrie sets out to exact her revenge on those that have wronged her, including her Mother.

I don’t want to spend too long discussing the main plot because I’m sure by now you’ve either read it yourself or watched the 1976 film adaption. Instead, I want to focus on the key talking points that the book brings up.

Carrie as an Outcast

I found myself sympathising with Carrie on many levels. One; she is a teenager struggling to fit in with her environment. I know she isn’t the only one to go through these hardships. They are often defining moments in our lives, and at the time, High School appears to be the biggest thing that has happened to us. That is of course until we leave, grow up, and begin a somewhat normal life; ish.

The traumatic experience of the opening shower scene applies to me, but of course under different circumstances. Being traumatised by bullies is something I carried around with me for some time, but through reading books such as this, I was able to see past these events.

When I started High School my friends (Hah) deserted me because they were desperate to be a part of the ‘cool crowd’. You know, the ones who grow up to smoke weed and have semi-permanent ASBO’s.

Anyway, this left me isolated and without an identity for many years. It wasn’t until I went to University, and then later moved to Canada, that I began to find myself again.

Of course, I’ll never forget, but it helps to understand why they happened and the hate that manifested from it.

Some people believe that being bullied is a ‘rites-of-passage’. I’m going on record here and calling bullshit! Completely humiliating someone verbally, psychologically or psychically is never ok. Ever.

So that’s enough about my traumatic school period (wipes a tear away), back to Carrie…

I think it’s also important to note that if I had the telekinetic powers of Carrie at the time of High School, then I too would have caused such devastation. At the tender age of 16, it’s easy to think that you know it all. That this is it. This is my life now. It can be hard to look forward to the future, especially when times are bleak. But that’s what life’s about, isn’t it? Giving you lessons to learn, allowing you to look back at all of your accomplishments since then and even let out a sly chuckle. I know I have.

Why does Sue feel guilty for berating Carrie during her first period, and why the change of heart?

This question has a lot to do with perspective.

Initially, Sue acts with a typical pack mentality. She wants to be seen as one of the popular girls alongside Chris, so joins in with their behaviour.

It’s only afterwards that Sue begins to see Carrie’s side of things and realises her naïvety in the situation.

What happened was in no way Carrie’s fault. Her mother held her back and kept information away from her believing certain parts of nature to ‘be a sin’. This conversation included discussing with Carrie about her first period.

When Sue learns of Carrie’s background it is there that she begins to show empathy towards Carrie and wants to try to atone for her mistake. The act of atonement is asking Tommy to take Carrie to the prom instead of her.

It’s this self-sacrifice that ultimately keeps Sue alive in the end, as she is not present for most of the destruction.

The prom at the end of Carrie evokes elements of Cinderella. Cinderella is stopped by her wicked stepsisters, in this case, its Carrie’s mother, Margaret who’s preventing her. Carrie participates in the prom thanks to Sue, who feels guilty for the earlier shower scene incident. Sue tells her boyfriend Tommy to take Carrie instead of her, where he obliges.

These fantasy-tale comparisons soon end when Carrie’s classmates set to humiliate her yet again. This is the catalyst that drives her to seek revenge on them: no prisoners and no exceptions.

In this final revenge sequence, Carrie is finally free from all of her problems. She can act as only she sees fit, which just so happens to be in a violent nature. Lashing out at all those around her everyone feels her brute force; classmates, teachers, staff, the town’s civilians.

King’s writing throughout Carrie is exceptional. You’re instantly engrossed in the environment of the town, of the school, and the prom by his cultivating of the five senses. I don’t know if any other author has the attack on these wits as King, which when the action ramps up, gives him that extra bite.

Although Carrie is far from being one of my favourite books, I do believe it holds a lot of educational value. It’s a shame that it’s one of the most banned school books in America, much like Lord of the Flies.

There’s a lot to learn from this books portrayal of isolation, not to mention its notion of bullying. Personally, people will often ignore, or in this case, ban books that force them to answer difficult questions. Carrie could just as effectively be used to help teenagers understand the effects of isolation and possibly get them talking about their feelings.

What would you have done during High School if you had Carrie’s telekinesis powers? Would the destruction be more or less? How have you channelled your traumatic events into positive steps going forward? Let me know in the comments below.

Ask the Dust by John Fante

Kiss Me, Judas by Will Christopher Baer

Fear and Loathing in Las Vegas: A Savage Journey to the Heart...

The Room by Hubert Selby Jr.