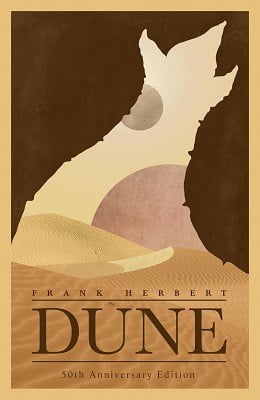 Synopsis:
Set on the desert planet Arrakis, Dune is the story of the boy Paul Atreides, who would become the mysterious man known as Muad'Dib. He would avenge the traitorous plot against his noble family and would bring to fruition humankind's most ancient and unattainable dream.
Series: Dune
Genre: Science-Fiction
Available from: Amazon UK | Amazon US | Audible

For anyone who follows me on Facebook, you would’ve heard me talk about how I want to expand my horizons and start reading some new genres. Science-fiction being top of that list.

After many recommendations, thank you everyone who suggested books, there was one remarkable stand-out – Dune.

Given how big this book is, I knew I’d be throwing myself into the deep end, but you guys haven’t let me!

Dune is a heroic epic-novel that follows the fall of an empire, the rebuilding, and the wars that follow. The landscape is vast and encompassing, the characters are incredibly complex, and the plot is well presented.

Once you get into the crux of the action, roughly a third of the way in, everything begins to fall into place, the locations, the technology and the motives all make sense: Trust, ye of little faith.

With that said I think one of the reasons Dune isn’t as famous or as well remembered as other Sci-Fi epics is because the action is sparse in comparison.

There’s lots of dialogue, which is well-written, and plenty of philosophical opinionating, which I’ll get to shortly, but not a lot that converts well to a more visual experience such as film, hence the success of a franchise such as Star Wars.

Speaking of which, it’s clear that Dune left a considerable impression on the Science Fiction world at large, with Star Wars borrowing heavily from the landscapes. Even at a stretch, Blade Runner (Why Do Androids Dream of Electric Sheep by Phillip K. Dick) has a futuristic world that involves its main character in a revolutionary plot to overthrow powerful controlling governments.

But they both have more combat, more encounters and more at stake.

I’m not saying this in any way makes Dune a bad book, or substandard in comparison, but simply why I think it’s not as big as some of the others.

Variety is the Spice of Life

Spice is the universe’s most sought-after commodity, and it can be found naturally on Arrakis. Now, such a reward doesn’t come without its risks.

Firstly, it’s found out in the harsh deserts that can offer up destructive sandstorms that will tear the skin off your bones – Ow. The other problem is the giant desert-worms that inhabit the surrounding areas.

They travel deep beneath the surface but can react to the light vibrations of a walking man, making travel without an airship incredibly dangerous, if not impossible.

I won’t get too deep into the geography or mythology of this book because 1) I’ll be here all day, 2) that’s part of the fun of feeling the book unfold as read on.

The spice is a clear substitute for oil; found in the deserts and controlled by the rich. With this reference, it also parallels the native desert tribes with the people living in Middle-Eastern countries.

I started to make comparisons with modern-day Saudi Arabia, but clearly, Frank Herbert must have had a more general view, given that these issues were different back in the ’60s.

Morality and the ethics involved in these processes are also discussed at length, with characters coming to blows over what they believe is the right choice for their faction, as well as what’s right for the people at large.

Again, similarities to Western countries (America) trying to dictate how Eastern countries should run their governments and sing thus excuse to invade and claim resources.

While reading the first half of the book, names do become a little confusing but stick with it. Planets, characters and even ritual names all fall into place as the story kicks on.

I’m glad to have read Dune, not just to tick it off my list, but because t’s given me the confidence to dive deeper into the world of Sci-Fi after a few previous false-starts.

Having read Dune, I can now understand the fan base behind it, and how readers can become immersed in such a rich environment. Filled with futuristic technology, dangerous quests and dynamic characters, this book will live long in my memory.

Flowers for Algernon by Daniel Keyes

The Three-Body Problem by Cixin Liu

Heart of a Dog by Mikhail Bulgakov