Kiss Me, Judas by Will Christopher Baer 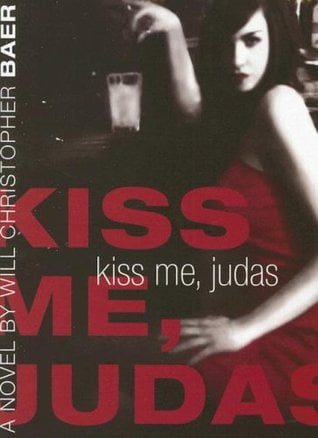 Synopsis:
Phineas Poe, disgraced cop and morphine addict, has just been released from a psych ward when he meets a beautiful woman named Jude in a hotel bar. Red dress, black hair, body like a knife. He takes her back to his room and wakes the next morning in a bathtub, missing a kidney.
Series: Phineas Poe
Genre: Contemporary
Available from: Amazon UK | Amazon US

For those unfamiliar with Will Christopher Baer, myself included up until recently; think of him as Chuck Palahniuk writing neo-noir crime. Containing dark settings, twisted underworlds, over-the-top situations and characters that will live long in the memory.

Kiss Me, Judas, published in 1998, is a noir-style novel which centres on the main character Phineas Poe, just released from a mental hospital after suffering a breakdown, not long since the death of his wife, Lucy.

Upon meeting a young prostitute in a bar, an urban myth takes place, you know the one where you pass out and wake up with no kidney? Well, that’s what happens to poor Phineas. Oh, and for good measure, he’s a former cop who’s now lost his gun.

Ok, so from that statement alone you can guess the kind of book this is going to be; adventurous, gratuitous and full of twists-and-turns. Just what I ordered.

As we’re entering into a surreal, drug-fuelled trip you need to be ready for far-out plot twists and consequences that you wouldn’t normally find in a general thriller.

But that’s the point.

It’s a neo-noir nightmare that twists and turns leaving the reader confused and fragmented but I was always eager to read more. Every chapter ended with me thinking, what next? How fucked up will this get? Turns out I could never imagine…

Reality becomes blurred and manipulated with each character wanting to stamp their own intentions onto Phineas path. Who should he trust? Who’s on his side and who’s using him?

With a bevy of eclectic characters, ranging from the prostitute herself, Jude, who is a former Special Forces soldier, to the Blister and Isabel, brother and sister set out to save someone they love. Or are they?

That’s the thing about this novel, everyone states their motives but how many of them are true to their word? Everyone wears a mask and the others are waiting for their counterparts to slip so they can jump on the situation and take advantage.

The story’s about Phineas having his kidney stolen by Jude, and then him chasing after her to get it back. In the process, he falls in love with her, without knowing her intentions for taking it. Again, her intent is present but actions and truth are separate.

Baer takes us on a wild hallucinogenic trip, going from kidney chasing cat and mouse antics to cartel drug-smuggling to hells angels to rape and murder. Never a dull moment, his imaginative prose keeps your engagement and paints a cynical picture of the world around Phineas.

On the other hand, Kiss Me, Judas is far from the perfect mystery.

You’re left saying ‘but why?’ in a few circumstances and a lot of these questions are never answered by the close of the book. Characters often border on cartoony and seem set on causing as much mayhem as humanly possible.

Closing Thoughts on Kiss Me, Judas

Baer’s style is clear throughout this novel; a noir set-up with an extreme synthetic, similar to that of a Sin-City graphic novel. And certainly not for the faint-hearted. A first-person narrative that is serious and funny, graphic and malicious, yet exciting and, at times, tender. All of these make it difficult to distinguish the difference between dreams and reality; which is one of Kiss Me, Judas’ best qualities.

There are several disturbing moments creating real tension, which helps to keep the book being anything but boring. Sprinkled with touches of dark humour throughout and you have one greatly underappreciated book.

Above everything, I love the tone of the novel coupled with the strong plot points, which I’m keen to explore in Will Christopher Baer’s later books, Penny Dreadful and Hell’s Half Acre, rounding off the Phineas Poe trilogy.