Penny Dreadful by Will Christopher Baer 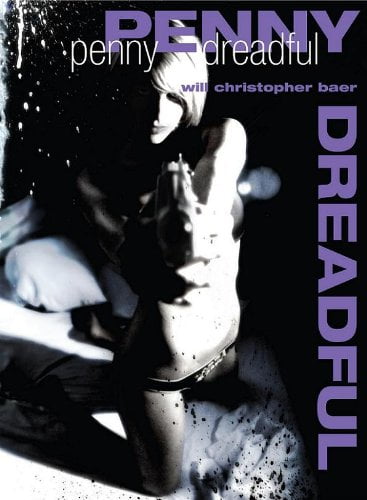 Synopsis:
When Phineas Poe is enlisted by his old ally, Detective Moon, to find a missing cop named Jimmy Sky, he is drawn into the Game of Tongues, a violent fantasy game played by the disaffected and delusional in the punk clubs, rooftops, and sewers of Denver.
Series: Phineas Poe
Genre: Contemporary
Available from: Amazon UK | Amazon US

A claustrophobic nightmare in which video games, violent movies and obscene characters are all merged into one. Following on from Kiss Me, Judas, delirious ex-cop, Phineas Poe heads to Denver to discover that the laws of everything known before have been rewritten, and identities are more mysterious than ever.

Unlike Kiss Me, Judas, Penny Dreadful crosses over from neo-noir and into a more abstract reality mixed with the wildest of fantasy. This book doesn’t offer moral milestones or guided hands; It’s a full-scale torrent of psychotic manipulation.

Phineas is called upon by an old friend, Detective Moon, to find a missing cop named Jimmy Sky. In the process, Phineas is drawn into the ‘Game of Tongues’; a vicious fantasy game undertaken by the delusional inhibitors of a Denver punk club.

With everyone who crosses his path having multiple personalities, Phineas begins to feel his own grasp on reality slipping. The only way to find Jimmy Sky is to conquer his own fears and inevitably beat the game.

Also returning from the first book is Eve, although this time around she’s playing the game under the alias, Goo. Along with her boyfriend Chrome and his misfit assistant Mingus the Breather, they pray on tremblers in dark back alleys, rooftops, and seedy clubs.

Whereas in Kiss Me, Judas the main organ of transplant was Poe’s kidney, this time around its tongues.

Led by Theseus the Glove, the game is defined and followed according to strict rules that sees individuals ranked according to their current status. In order to move up the rankings, you must take as many tongues as possible. If you lose your tongue you’ll be placed at the bottom of the pile.

It’s a complex game that goes back and forth between reality and fiction. It’s not too difficult to follow but it does become rather repetitious.

This is an excerpt from an interview that Will Christopher Baer did with Craig Clevenger. It perfectly illustrates Baer’s rushed idea of writing until you’re burnt out, trying to crowbar in as much as possible. I think this isn’t any more evident than in Penny Dreadful, where he has come up with an idea (Game of Tongues) and ran with it as far as he could.

Punk clubs and dirty needles, sexual exploitation and dangerous games; many of the contraband contained within Penny Dreadful. Yet it’s these elements that often distract away from the main plot; however weak it may be.

A game devised by rules, set by one man, who then uses it to control the area of Denver is altogether lame; especially when compared to the previous title – which was hard-hitting and edgy. This just feels lethargic and fragile.

The final payoff for Penny Dreadful is much less inspiring than Kiss Me, Judas, which when read within such a close proximity, is disappointing.