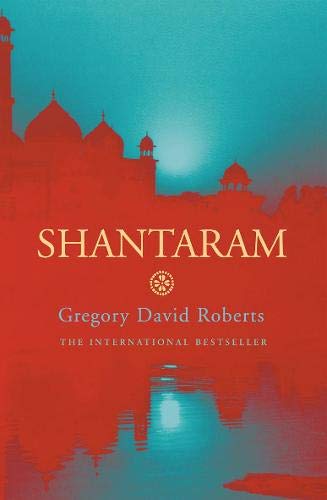 Synopsis:
Narrated by Lin, an escaped convict with a false passport, he flees a maximum-security prison in Australia to escape to Mumbai. Accompanied by his friend, Prabaker, the two enter Bombay's secret society of beggars and gangsters, prostitutes and holy men, soldiers and actors, and Indians and exiles.
Genre: Contemporary
Available from: Amazon UK | Amazon US | Audible

I was apprehensive going into this one. Not only is it a whopper of a book, but it’s also one that carries many polarising views. Some admire its depth and use of the environment, whereas others criticise these points and suggest it needs a good edit.

The other problem I had was an unfair bias of comparing it to Salman Rushdie’s books simply because they’re based in and around India. Thinking this too must be mystical and meaningful in the same sense.

Shantaram is spiritual from the opening scenes – throughout the characters interactions – and on to the closing pages.

Having sat on my shelf, staring me down for some time, I gathered if I don’t read it now, I never will. I was in that sort of mood.

I suppose, to sum up a book of this magnitude would be difficult, so I’ll keep it brief.

The author, Gregory David Roberts, escapes from an Australian prison while being held on charges of multiple armed robberies. He makes his escape to India, where he becomes submerged into the local culture, its people and their way of life.

These actions also lead him into deep ties with the Mumbai mafia, tasking him with many hard decisions to make regarding his life.

That’s the best I can do without giving you every plot point.

The best revenge, like the best sex, is performed slowly, and with the eyes open.

Trust me when I say, a lot is going on here. Multiple plot points are running simultaneously, characters continually appearing and disappearing equally as fast throughout, and a rich environment for the story’s roots.

India as an Unknown Land

Robert’s writing of India is gripping, not only did it make me relate to the situations, but it has given me a sudden interest in visiting Mumbai soon. I’d say that’s a sure-fire sign of a great writer.

My favourite part of the book is the explaining and subsequent flooding of the river. While Lin panics that the water has risen to his knees, the villagers have assembled a line of sticks that they believe the overflowing current will not pass.

This shows a clear contrast between the two cultures. One that will worry of imposing danger, needing to counter it with force and the other being one of faith in a higher power.

Neither is right nor wrong, as each situation these philosophies are brought to is different. Still, the writing gives excellent balance to both.

Subsequently, this makes you think about how different life would be, should you change your approach to each situation you encounter.

We may not be able to choose what happens to us, but we can choose how to interpret it.

Despite my praise for this fantastic book, there were times when I had to put it down. This is due to it becoming too challenging to take on board everything that was being told.

There’s a lot of information dumped on the reader throughout. If you’re not paying attention, you’ll start questioning who these new characters are and where the hell they came from.

Equally, there were times when the plot was lacking, and the chapters consisted of long-drawn dialogue exchanges. Not bad, per se, but certainly tedious at times.

The relationships shown between Lin and his friends, especially the bond created with Prabaker, are exceptional. Each have their own little quirks that keep appearing throughout the book.

Personally, I read Shantaram as a work of fiction.

I think this stopped me from questioning everything that happens along the way because otherwise, I would have been susceptible to a few tell-tales within the plot. Hey, maybe it is stranger than fiction?