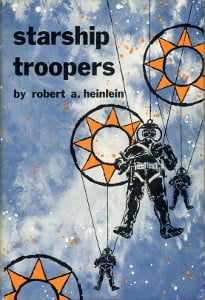 Synopsis:
In one of Robert A. Heinlein’s most controversial bestsellers, a recruit of the future goes through the toughest boot camp in the Universe—and into battle with the Terran Mobile Infantry against humanity’s most alarming enemy.
Genre: Science-Fiction
Available from: Amazon UK | Amazon US

First released in 1959, it’s thought that Heinlein wrote the book as a direct response to the nuclear testing moratorium taking place at the time. This has led some to praise the books reflective views while others have criticised its heavy use of military propaganda.

Written as a memoir from Juan ‘Johnnie’ Rico’s perspective, there are a lot of information dumps from various characters. Written through Rico’s eyes these second characters still take up large portions of the book.

Take his History and Moral Philosophy teacher, Jean V. Dubois, whom he later finds out was a Lieutenant Colonel in the Terran Federation. He lost his hand during the war, and now he’s teaching at Rico’s school, encouraging others to join up as he did.

Dubois’ character looks to be a stand-in for Heinlein, as his thoughts and philosophies are like that of the author.

Rico, along with his buddy Carl, trundle through High School thinking life’ll be swell until Carl decides he’s going to fight.

This puts Rico in a situation; carry on without his best friend, or follow his path and sign up for the Terran Federation? He chooses the latter.

In the beginning, Rico is a whimsical guy. He has a crush on his friend Carmen, who also joins the military on the same day. These two characters play a big part in Rico’s decision-making process, at least in the beginning.

As the story progresses, they split up, and each lead their own path to greatness.

None of these character arcs is more prominent than Rico’s; going from sappy high-schooler to commander of Rico’s Roughnecks aboard the Rodger Young, later with his father as platoon sergeant.

An interesting point to note is when Rico and Carl try to sign up for the Terran Federation; they’re always talked out of it. They meet a former military general, Fleet Sergeant Ho, who, with a mechanical arm, tells them that they’re not made for the military. They’re too soft and won’t last five minutes in combat.

This is an interesting point because it’s the recruitment’s first attempts at wringing out the weak soldiers, by stopping them from signing up in the first place.

There are many examples of this throughout the book: when Rico first begins training; when he’s first launched from his pod into combat; when he wants to become a senior officer. It seems to be their usual way of hardening the ones they have and saving time by discouraging the rest.

The counterpoint here is that the military isn’t allowed, by law, to turn anyone away; hence the constant bombardment of negative feedback.

If a soldier goes missing, then the services won’t hunt them down and punish them. It’s a win-win situation for both parties.

While on the subject of the infantry, Heinlein uses the two warring sides, the voluntary human army and the collective race of bugs, to show their glaring differences. A volunteer force is stronger because the soldiers all choose to be there. They all willingly sign-up without any pressures and can drop out at any time.

The Terran Federation is Heinlein’s perfect blend of Government and Army. Domestic and military views present within a single entity, always aggressive and always ready.

There are though similarities between the Terran Federation and a Nazi-led Germany.

Throughout, Heinlein pushes the notion, often through Rico, that for a society to grow and adapt, they must stay aggressive. This means developing their armed forces and using them whenever necessary. It also leads to violence when a peaceful option may have been a better solution.

Attack of the Bugs

Throughout the book, propaganda tells us that the bugs or Pseudo-Arachnids, are stupid and deserve to die, but this is later contradicted by Rico.

If the bugs are so stupid then ‘how did they manage to build spaceships?’

While holidaying in Buenos Aires, Rico’s Mother is killed by a bug attack. This is the catalyst that brings Rico and his long-distanced Father together. His Father, who has always been anti-militant and entirely against Rico signing up in the first place, now decides to join his son in combat, all be it in a different command.

Eventually, he becomes his Father’s commanding officer, giving him orders when going into battle.

This whole switch-around is an exciting idea. The anti-militant Father who later changes his mind due to unforeseen circumstances and joins up with his son. Only to then have his Son become the boss and start to take over these parental responsibilities.

The book, at times, does feel like a piece of recruitment propaganda and whether that was Heinlein’s intention or not, it can’t be denied that he was hostile in pushing forward the notion of war. Preachy is probably the best word to describe this kind of content.

However, it feels unfair to place Robert Heinlein into a box, say it be; fascist, right-wing dictatorial, or warmongering elitist. The book doesn’t always serve as a means for the author, i.e. his entire voice portrayed through his characters. It is possible to build scenarios to create tension.

Isn’t that what great fiction does? Pierces through your powered armour.

Overall, Starship Troopers is an enjoyable read and, despite its flaws, will keep you entertained throughout.