The Atrocity Exhibition by J.G. Ballard 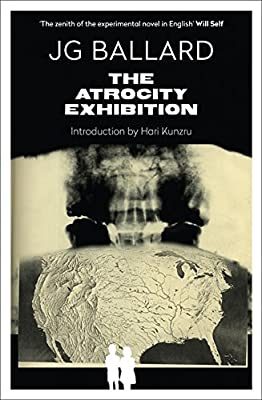 Synopsis:
Easily one of the 20th century's most visionary writers, J. G. Ballard lived far ahead of his time. Called his "prophetic masterpiece" by many, The Atrocity Exhibition practically lies outside of any literary tradition. Part science fiction, part eerie historical fiction, part pornography, its characters adhere to no rules of linearity or stability.
Genre: Contemporary

Categorised under the guise of Science-Fiction come Fantasy, The Atrocity Exhibition is a collection of short pieces that were previously published in various magazines. I say pieces because short stories would give you the wrong impression when going into this one.

First published in the UK in 1970 by Doubleday & Company; it was Nelson Doubleday Jr who personally cancelled further publication and ordered that existing copies be destroyed fearing legal action against the company due to the slanderous nature it places on the celebrities mentioned.

Yet, this is precisely why Ballard’s writing is so unique.

He’s not afraid to bring forth the notion of celebrity, place it under the microscope and make us think about why we treat these people so differently. What makes them so unique? Are they not just skin and bones like the rest of us?

This is never more prominent than in his describing of Elizabeth Taylor’s tracheotomy. This event occurred when she developed pneumonia whilst filming Cleopatra.

By inducing the image of everyday incidence, Ballard is able to not only rationalise these views of celebrity but also offer critique. However, with a penchant for the extremes, he dives right in at the deep end, leaving little to the imagination.

The death of Marilyn Monroe and the assassination of John F. Kennedy are extensively brought up through this collection. These range from unusual incidents leading to the events, suspected plots against them, and even alternative realities in which they play out differently.

Linked by an irrational narrator who seems set on starting World War III, the book does have a sense of disjointed ramblings. I’d compare this to a David Lynch-esque nightmare dystopian where nothing seems to make sense, but by the same token, you can’t turn your eyes away.

The joy of this book comes in the revised edition, which J.G. Ballard has added his own musings to the end of each chapter. This gives a much greater insight into his thinking, his expectations when writing them, and how he feels about them some thirty years later.

Hearing him talk about how a bookstore was taken to court on obscenity charges for giving out printed pamphlets featuring the story, Why I Want to Fuck Ronald Reagan. Even though he had Ballard’s permission, he was convicted for supplying the fiction to the public, a serious offence in the UK back in 1968.

There’s no other book quite like this. One that throws an assortment of a declaration of war, apocalyptic fallout, reconstructions of fatal celebrity events, and erotica all within a few paragraphs.

From the very beginning, I knew this was the cleanser I’d been looking for.

I read Crash last year and wasn’t overly impressed, and having spoken to a few of you over on Instagram, apparently, I jumped straight into the shark tank. Instead, start here was the general consensus.

My love for the weird and wonderful has now returned. And It’s all thanks to J.G. Ballard; a man who’s still seen as an enemy in the US due to them viewing this collection as slanderous. They’re very protective of their celebrities/dead presidents across the Atlantic.

The Atrocity Exhibition is an exciting blend of extreme-fiction and carefully crafted narratives. Using his trademark for warped realities into the everyday, Ballard shows why he deserves to be mentioned as one of the late great British writers.

Whether you like his work or not, there’s no denying the man’s ability for delivering the unexpected; all whilst getting under the skin of those standing in his way.

What do you think is J.G. Ballard’s best book? So far I’ve read this and Crash, but I’m keen to read more of his novels in the future. Let me know your suggestions in the comments below.