The End of Alice by A. M. Homes 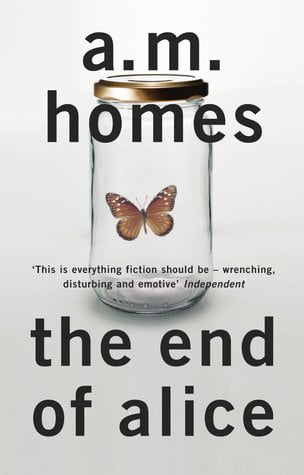 Synopsis:
The incredible story of an imprisoned paedophile who is drawn into an erotically charged correspondence with a nineteen-year-old suburban coed. As the two reveal and revel, in their obsessive desires, this is a novel that is part romance, part horror story, at once unnerving and seductive.
Genre: Contemporary
Available from: Amazon UK | Amazon US | Audible

We’re introduced to the story’s protagonist, Chappy, a middle-aged man who’s been in prison for the last 23 years, later revealed as a child killer.

He receives a letter, as he often does from his admirers as he calls them — usually, University professors looking to conduct specific studies; all of which he declines.

The letter is from a 19-year-old girl who has feelings of infatuation for a much younger boy. It’s here that we learn of the protagonists’ crime or at least a general overview.

Anonymity is a big part of this book. It keeps us from ever being grounded with the characters and constantly has us on our hunches. It could be the guy next door or the girl working at the local supermarket. Who knows?

Through back and forth letters he begins to learn about her and us the reader about him. He fills in several of the gaps with either his own feelings/experiences or with thoughts of fantasy.

These letters trigger him to reminisce within him and cause him to think about a young girl that he knew, Alice. It’s here that we’re given more clues as to why he’s in prison.

Meanwhile, the girl in question makes a move towards the boy, Matthew, by returning his tennis racquet after he left it in a café. She was only in the café because she’d followed him and his friends there to get a closer look at him. Here we learn that Matthew is only 12 ½ years old.

This quickly develops into her paying Matthew $10 to play tennis with her every week, unknowing that he is telling his Mum she is giving him lessons for $15, pocketing the $25. His street smarts do much to win her over more still.

While in his cell, our protagonist is raped continuously by a fellow inmate, Clayton. He feels there’s no point in fighting back as this is punishment for his crimes.

When the girl’s invited over to Matthew’s house by his mother, we’re introduced to one of the grossest scenes I think I’ve ever read, comparative to the rat scene in American Psycho.

The boy collects his scabs and then occasionally goes into his matchbox for a second taste. In excruciating detail, we’re told about how much she wants to do the same, and then eventually doing so.

Around this point in the book, our protagonist tells us of the abuse he suffered at the hands of his Mother when he was a young boy. His Mother was taken away to a mental institution, and he was raised by his grandmother.

On occasion, his Mother is allowed out for a couple of hours at a time, and he can go visit her.

It’s during one of these meetings, at a local spa, that his Mother sexual abuses him. This book uses menstruation as a sign of torture, in this case referring it back to the protagonist’s sexual abuse at the hands of his mother.

Towards the end of the book, we learn of the protagonist’s relationship with a young girl Alice, whom he meets while on holiday.

He speaks of her ‘accidental’ death although we can never fully trust his words. He claims that she jumped into the lake one day to spite him, knowing that she couldn’t swim, and then banged her head on the underside of the boat. She does eventually recover but decides to hide in his car boot to follow him where ever he may go.

We’re then shown the police report. It shows how Chappy stopped off at a sleazy hotel and Alice made her presence known.

Alice explains that she has begun her period, and much like Carrie, is unaware of how such things play out. Alice believes that she has been cut by Chappy in a sadistic manner, which he becomes annoyed at. He tries to explain her menstruation to her, but she is having none of it.

She takes out a knife and claims that she too will cut him.

He becomes angry at her, an understatement of sorts, and stabs her sixty-four times. This also leads to him decapitating her in the process.

The police reports claim signs of sexual abuse as well as him continuing to have sex with her once she’s dead.

The End of Alice in the Media

Upon release in both the US and the UK, the book was heavily criticised for its portrayal of two despicable characters. A child-killing paedophile and a premeditated paedophile.

I’d argue that as the book is being told from their perspectives, it needs to hold these thoughts and descriptions. I’m in no way saying they’re correct in how or what they do, but it is at least true to life.

There were also calls for its banning due to scenes of child sexual abuse and explicit depictions of prison rape. Again, this is never held in high regard with the protagonist even going as far as claiming he deserved to be punished for his crimes.

The nature of this book draws the reader in and then bombards them with a bleak landscape. Much like the prison mentioned, there is little escape from this book. Sure you can put it down, but it will stay with you long into the night.

Most of the book is written to shock, although admittedly it’s written in a more fluid style to that of Chuck Palahniuk’s Snuff, making it easier to read – slightly.

The characters are fleshed out, the protagonist having a definitive beginning, middle, and end. He’ll get under your skin, claw at your eyeballs and squeeze your throat, all for the sake of good literature.

Another problem with the book is that it feels much like an updated version of Lolita. Much of the same points are touched upon but this time in more graphic details.