The Silence of the Lambs by Thomas Harris 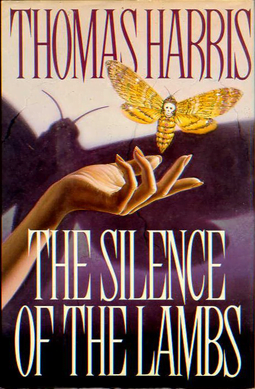 Synopsis:
A young FBI trainee. An evil genius locked away for unspeakable crimes. A plunge into the darkest chambers of a psychopath's mind in the deadly search for a serial killer.
Series: Hannibal Lecter
Genre: Thriller
Available from: Amazon UK | Amazon US | Audible
Estimated Read: 5 minutes

There are excellent crime novels, and then there’s The Silence of the Lambs – On the step above all others. This is a book that isn’t afraid to take time to explore the murderer’s motives and characteristics, supporting characters, and an engaging plot.

All this while building a now-infamous villain, Hannibal Lecter.

Despite spending the majority of his time behind bars, Lecter is the main focus of the story, with the storyline villain being a skin-wearing man/woman who takes a backseat throughout. That’s not to say that Buffalo Bill isn’t terrifying, because he is. Still, it’s evident from the start, he won’t live to see another novel.

This is a dark psychological thriller that focuses intently on the motives, and mental approach of Buffalo Bill. As Lecter, a former practitioner of psychology is the one offering advice, it tends to be of a disturbing nature.

A census taker tried to quantify me once. I ate his liver with some fava beans and a big Amarone.

Hot on Bill’s case is cop-in-training Clarice Sterling. Still, in police academy (not that one) she’s far from the finished product. It’s these elements of greenness (is that the right term?) that make her so endearing, and vulnerable.

The title The Silence of the Lambs is based on a nightmare that Clarice agonises over. One in which she ran away with her horse before it could be put to sleep.

In her escape, she could hear the lambs going to slaughter. Dr Lecter suggests that the Lambs in her head will never be silent – a recurrent nightmare; hence the title.

Buffalo Bill is based partly on Ed Gein, who created a top out of human skin, and Ted Bundy, who faked injury or a need for help to lure his victims over before subduing them. He’s also loosely based on Gary M. Heidnik, a man who kidnapped, tortured and raped six women, killing two.

A significant theme is transformation. Much like The Tooth Fairy in Red Dragon, Buffalo Bill is looking to transcend himself into something new. In this case, becoming a woman, in the sense of wearing a female body made from human skin – but more about that later.

He also places a death’s head moth into a few of the victim’s throats. This is further expanded on by his interest in their own metamorphosis from larva to moth.

His first victim, after killing his grandparents, Frederica Bimmel also wanted to undergo her own transformation. Due to her size, she believed that losing weight would make her more attractive, just as the pop-stars on her wall were.

Even when Gumb, Bill’s real name, captured her, and left her to starve in his pit, she still sent him love notes believing he loved her back. This shows the level of loneliness she suffered from, and how much change she needed to undergo to find a meaningful relationship.

Finally, Clarice is also going through a more linear change. She’s on course to become a qualified police officer, providing she passes all her exams. Due to work involving Lecter, and tracking Buffalo Bill, this goal takes a back seat, with Clarice showing greater empathy for the victims than her own desires.

It could also be paralleled with her own nightmares of the screaming lambs.

In a way, it makes sense that if she can bring the serial killer to justice, and possibly rescue the last victim, Catherine Martin, she’d be able to bring herself peace. However, Lecter warns her that this approach will always fail because it still doesn’t address her own internal conflicts.

Hannibal seems to be the only character content with who he is, but not necessarily where he is (in prison).

Clarice is often looked down upon for being a woman within a heavily male-environment. All those around her, especially her superiors, are men who have little respect for women.

Dr Chilton, head of the psychiatric facility housing Lecter, even comments on the reason why he feels Clarice was sent to see Lecter instead of a more skilled officer; “A young woman to ‘turn him on,’ I believe you call it. I don’t believe Lecter’s seen a woman in several years.”

Similarly, Clarice and Gumb are on opposite ends of the scale.

Clarice wants to be taken seriously as a female police officer, sick of men leering over her. In contrast, Gumb intends to become a woman, desired by those around him.

One of Gumb’s alternate motives could be his determination to become his mother.

She’s mentioned, through Lecter who had counselling sessions with Gumb prior, that she was an aspiring actress. This dream fell apart when she had baby Jame, often blaming him for her own failure. She’s seen as an alcoholic prostitute, who misspelt James on his birth certificate.

It wouldn’t be a stretch to think that by becoming a woman and imitating his mother, he could play the role he believes she should have.

Lecter mentions to Clarice that, “Billy [Buffalo Bill] was not born a criminal, but made one by years of systematic abuse.”

Another elevation in this book is the ability it gives the reader to see the world from both perspectives; crime fighter and criminal – all struggling with their own pains and aspirations.

My favourite part is definitely the scenes involving Hannibal inside of his mobile cage. I won’t spoil it, but it’s both deceptive and gruesome.

Thomas Harris has managed to build upon his first book, creating a villain that’s not only violently horrific but equally interesting. It’s no wonder Hannibal Lecter is now seen as a mainstay in the world of fictional killers.

The Silence of the Lambs is a highly-detailed piece that leaves little to the imagination on the visual aspect, but much to interpretation on a psychological level.

Having Lecter in a more significant role, compared to the previous book, he’s able to offer more insight into the character’s psyche, including that of Clarice’s.